The Minikitchen by Boffi is a practical and compact kitchen on wheels, which in the reduced volume of about a cubic meter manages to contain everything necessary for cooking and setting for at least six people. A real “portable kitchen”, enclosed with an ingenious system inside a small cube that can be easily transported from one room to another.

The original project dates back to 1963 and bears the signature of Joe Colombo, who already had a reputation as a visionary and future-oriented designer at the time. And it is still surprising today how, starting from his reflection on the mass urbanization of the post-war period, he managed to accurately anticipate the ways and needs of modern living.

Presented at the XIII Triennale in Milan in 1964, Minkitchen is immediately rewarded with a silver medal. Over the years it has been revised several times by Boffi to adapt it to new features and new technologies, with a special consideration for the most ecological processes. The most recent update dates back to 2014 and the following year it was awarded the best kitchen at both the Wallpaper Design Awards and the Elle Decor International Design Awards.

Minikitchen is now made up of a free-standing structure in white Corian (unlike the original project, which was made of wood), equipped with various storage units, doors and chests of drawers to hold pots, dishes and a small refrigerator. On the top there is an electric cooking plate and when the kitchen is closed it is hidden and protected by a Corian element used as a tray, and an iroko wood cutting board element that has inside a removable tray.

Minikitchen is also available in an outdoor version, suitable for cooking on the veranda or in the garden. This version is made of marine plywood panel covered in white or black Lasermat and can include the presence of a protective cover made of nautical technical fabric to protect it from the elements when not in use. 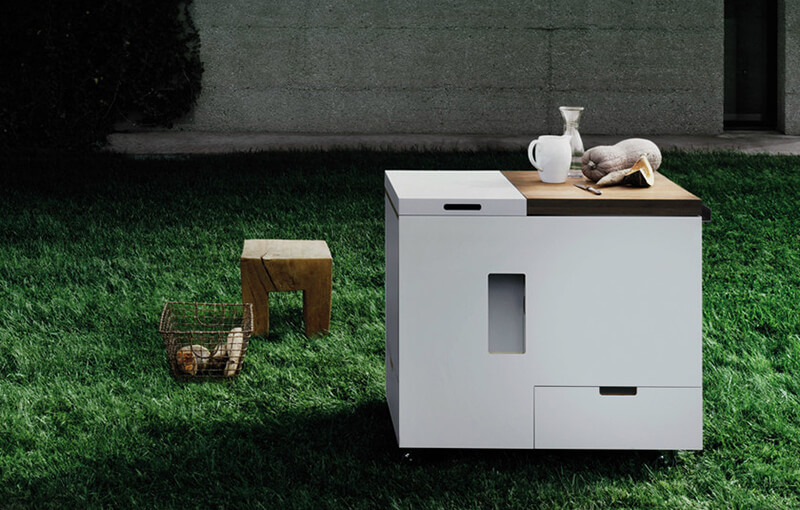 Things have to be flexible. My kitchen can be moved around or out of a room and when you are finished with it, it closes up like a box