The Fortuny lamp by Palluco is nowadays one of the most used lighting fixtures in catalogs and photographic sets of furniture, as well as in interior projects all over the world. Its design seems very modern, almost avant-garde, yet it was designed over a century ago, the daughter of the imagination of Mariano Fortuny y Madrazo. Eclectic artist and stylist, the Spaniard Fortuny was one of the protagonists of the lively Venetian cultural scene of the early twentieth century.

One of his great passions was the theatre, where he dealt in particular with stage costumes and scenography. And it is precisely to use it on the stages of Venice that he created the Fortuny floor lamp in 1907, in which the light reflected on a fabric lampshade, creating indirect lighting of the environment allowing you to quickly change the atmosphere of the scene.

The base is inspired by the tripod of a camera, with its adjustable central leg and the rotating head. The folding lampshade can be rotated and tilted, allowing you to direct the light in any direction. Mariano Fortuny, also famous for his fair for fabrics and for his pleated silk dresses, paid particular attention to the textile covering of the lampshade.

This detail is strongly emphasized also in the variants proposed by Pallucco, which has put the lamp back into production since 1985: the Fortuny Black has a white interior and a black exterior, in line with the original colors of the early 1900s, the Fortuny version fashion is more charming, with a shaded beige exterior, while the Fortuny Blanca lamp is in total white.

Even more precious are the versions decorated with fabrics of the famous Venetian fashion house Rubelli: from the warmer tones of Fortuny Bronze to the more icy ones of Fortuny Silver, up to the refined fabrics designed by Dominique Kieffer. 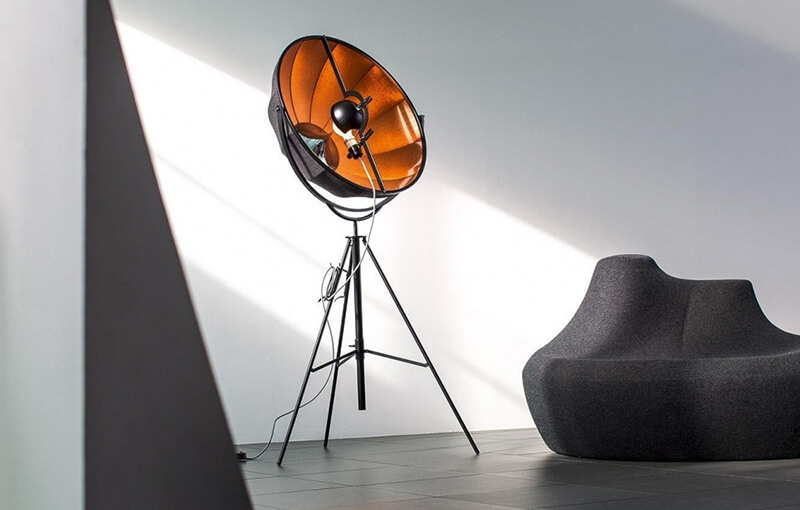 It is not the quantity, but the quality of light that makes things visible