Interview with Vittorio Livi | Entrepreneur, designer and artist of our time - Salvioni
All articles:
Interviews

Interview with Vittorio Livi | Entrepreneur, designer and artist of our time 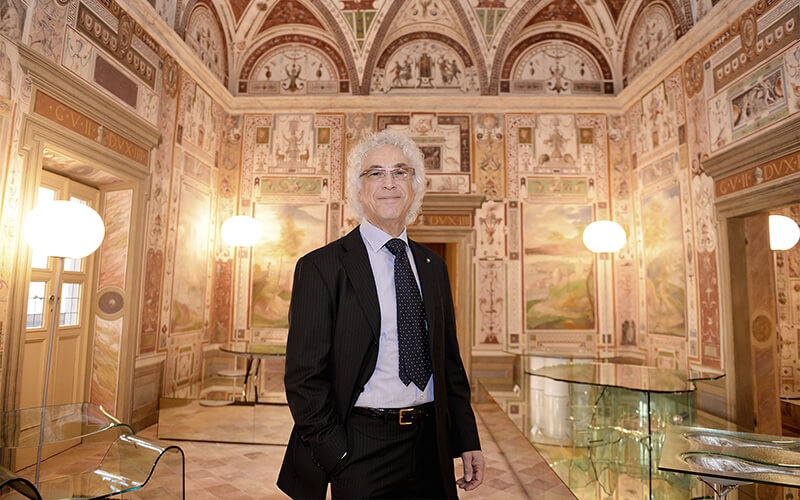 Entrepreneur, artist and designer. Anyone who reads about you cannot help but stumble upon these three different aspects of your life, each of which is characterized by successes and notes of value. What was it like for you to juggle these different fields? How do they live in each other, and where have they proved to be irreconcilable?

To answer these questions I have to start from the beginning of my youth. After primary school I attended three years of lower art school, where I was lucky enough to have extraordinarily good teachers. At the same time I was working in a glass factory. At the age of 18, I started my first business on my own, called FULLET, followed by three others specialized in innovative glass techniques, until they were merged in 1973 to establish Fiam Italia with a very precise mission: the design of curved glass. My whole life has been influenced by these first choices: Art, coming from the stimuli given to me at school; Entrepreneur, as a life choice; Designer, for initial necessity, to then continue to put my technical knowledge to good use. I think that between art and design there is a very fine thread. Art is suited to the emotions of the heart and spirit, while design, in addition to emotions, must meet the practical needs of everyday life. These are paths that can be crossed when the fantasy of beauty must be applied to rationality to make it more fascinating.

The steps of your career have always been linked to glass and its processing. What prompted you to choose it among all the other materials? What challenges did it entail and what successes?

As I said, randomness led me to approach this material little considered and known until then, despite having been discovered for several millennia. My curiosity has allowed me to explore its possibilities in many unprecedented aspects, making me discover that, perhaps, this material is the most important of the modern era, but also for the future of mankind. Being made of silica and lime, is itself a component of the earth: infinitely recyclable, does not undergo alterations when exposed to atmospheric agents, can undergo many more processes than any other solid material,  protects us from vandals, heat, cold, gives us the pleasure of seeing outside while remaining inside, is a material that does not obstruct space optically, allows us to scrutinize space and the deepest abysses. Let’s imagine what the world might have been if we hadn’t discovered glass! In 60 years of research and 50 years of Fiam Italia I believe I have given a strong contribution to the enhancement of this material, not only from a technical and aesthetic point of view but taking it from complementary to protagonist and, with the latest research, giving it a great deal of value.

Let’s open a brief parenthesis on glass, a material to which you have entirely dedicated your life. Where do you think the “spark” took off? When did you decide to devote yourself to your work?

It all started at a young age, when I finished art school and began my experience in the glass factory. At the time I was only fourteen, but my employer already appointed me foreman, thus offering me the opportunity to express my imagination by creating works that had not yet been conceived in that sector. I think that was the first step, but the most important came some time later, at the time when I was making rounded glasses with sacred images attached. I was there among the ovens and between one batch and another I ended up wondering if it was possible to make a stool completely in glass. Between 1967 and ’68 I made a prototype, the first with that material. At the time, however, glass still frightened the public very much, so when a journalist came to see me and found me comfortably seated on a plate of curved glass, his reaction was nothing short of amazed. He couldn’t believe his eyes. He immediately asked me to take a photo, and as a challenge I not only agreed, but even hovered with one foot on the seat. I immediately understood the potential of this idea, so I decided to create an entire collection. Unfortunately, at the time, the industry was not yet equipped for such products: there were no suitable ovens. Strong of my idea, however, I created not only the projects for those, but the entire line presented in 1973 by Fiam as the first example of furniture made entirely of curved glass. As amazed as they were, the public struggled to welcome this novelty: glass was seen as a cold and dangerous material, not very suitable for home furnishing. In all these years, Fiam’s mission has been to change the common paradigm, managing to communicate the beauty and versatility of this material.

We know that you have worked with numerous designers and artists of the caliber of Philippe Starck, Cini Boeri, Bruno Munari and more. What do you think they left you? Are there any of them that have particularly impressed you or from whom you feel you have drawn more?

I was very lucky in having pursued the collaboration and friendship of so many artists and designers who have written, with their presence, the history of our era. I would like to mention a few, for example: in design, Philippe Starck, Ron Arad, Vico Magistretti, Doriana and Massimiliano Fuksas, Daniel Libeskind, Marcel Wanders, Enzo Mari, Cini Boeri, Giorgetto Giugiaro, Rodolfo Dordoni and many others. As for art, Emilio Isgrò, Gianni Colombo, Bruno Munari, Arnaldo Pomodoro, Nedo Bendini, Walter Valentini, Umberto Mariani, Oscar Piattella, Riccardo Dalisi, Silvano Martini, and in particular Giuliano Vangi, my first teacher and today among the most acclaimed living artists in the world. Other important collaborations, with photographers Vincenzo Castella, Christopher Broadbent, Gabriele Basilico, but also the philosophical support of friends such as Domenico De Masi and others. I have to thank these characters because each of them, with their own genius, has left an indelible trace of their passage, with love, devotion and creativity, building in Fiam a precious treasure chest of absolutely unrepeatable experiences that only history can testify. Today it is possible to admire the results of these contaminations in a museum that we have specially created in a noble villa of the ‘400 /’ 700, the only one in the world to preserve works made exclusively with glass plates treated with different and innovative techniques. Divided into two categories, Art and Design, the museum covers about 2000 square meters of exhibition area, surrounded by two hectares of Italian gardens originating from the 1700s, which have aroused the interest of over 25 national televisions. Of course, all this has also brought us a lot of satisfaction and visibility, for me and Fiam Italia, such as the honorary citizenship of New York, the Compasso d’Oro Caree Award, at the same time as Ferrari, the Leonardo Award, received directly from the President Mattarella, my honorary degree, the Frontino award from the Magnificent Rector Carlo Bo, and many others, but also the presence of Fiam Italia in about thirty international museums, in addition to about a thousand and more national and international interviews. Furthermore, with my personal works, I also had the pleasure of delivering a crucifix to Pope Ratzinger and another very large one to Pope Francesco, thus being, curiously, the only person in history to have made two glass crucifixes for two living popes.

Fiam Italia is a company known throughout the world, winner of numerous awards and still able to amaze with its ability to renew itself. What do you think was the formula that led you to success? And what do you see in your future? What do you think are the indispensable qualities nowadays for an international design company like Fiam Italia to continue to excel in its work?

Over 50 years ago we started the exploration of this material, glass. Today, thanks to the precious work and ideas that our designers and artists have left us, we have managed to change the face of this material. For many decades minimalism dominated, and Fiam, with glass, reigned. Transparent, immaterial, algid, which can be inserted in any furnishing context, it does not occupy spaces in an optical way. Unfortunately, with the crisis that began in 2008, Fiam and glass found themselves out of the furnishing context. Little by little, completely different lines began to spread, with many other materials. For this reason, Fiam, thanks to the experiences and research carried out with its own planners, designers and collaborators, has managed to bring about a revolution on the subject, changing the paradigm of its historical essence. After millennia, in which man has always thought of the glass plate as the material / immaterial par excellence, algid, cold, easy to get dirty with hands and with the presence of dust, specular and planimetric, monochromatic, transparent, etc. , Fiam has managed to create glass sheets that are the opposite of these common qualities: warm, tactile, multicolor, with thicknesses up to 36mm, rough and translucent surfaces, difficult to dirty and easy to clean, moreover it has created in the glass many textures with different depths, giving the material three-dimensionality previously considered impossible. The result is glass similar to precious stones made exclusively by our glass masters, which, combined with other valuable materials, are made available to designers to create new lines much more attractive for our current collections and future. Another secret of Fiam lies in being an atelier open to the experimentation of many amateurs of this material, aware that only in Fiam they can fulfil what otherwise impossible. With so much genius available and with a material as ductile as glass, time boundaries become immense. Thanks to all this, which has made my life, and that of the company, interesting and happy, I am sure that we can continue along this path of beauty and innovation with the enthusiasm of my children and our collaborators. 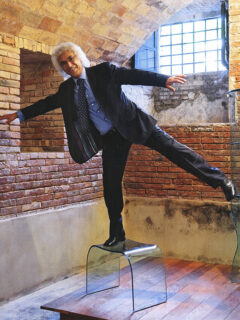 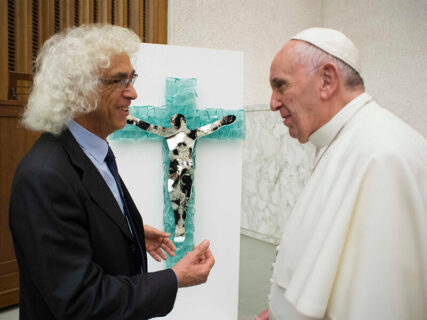 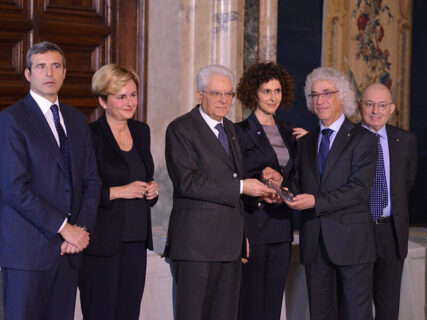 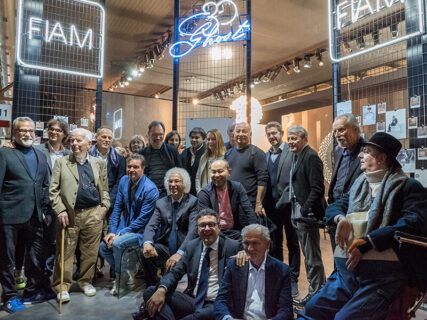 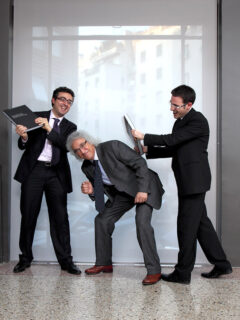 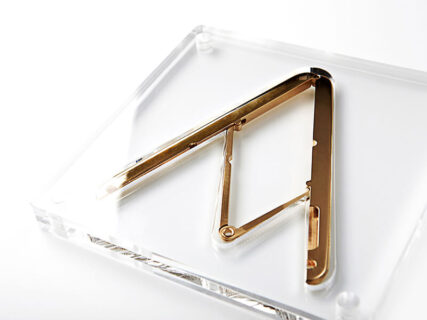 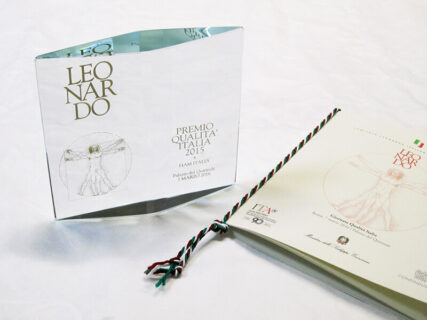 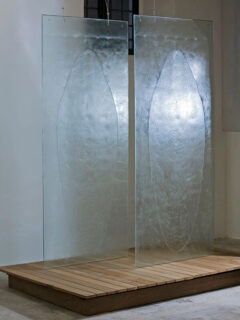 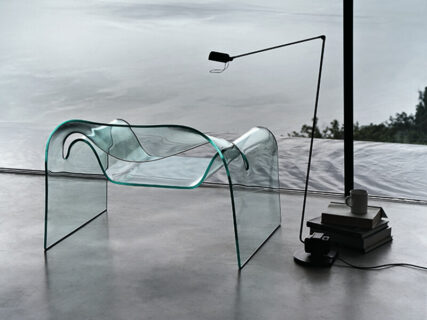 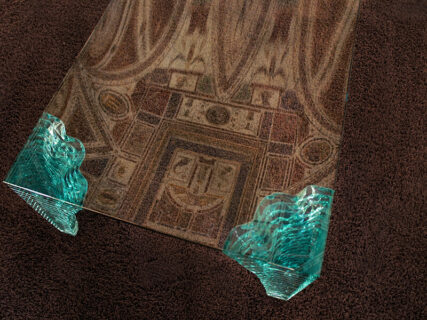 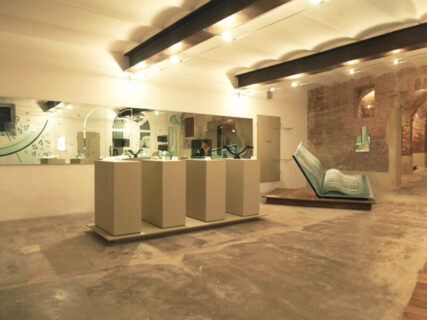 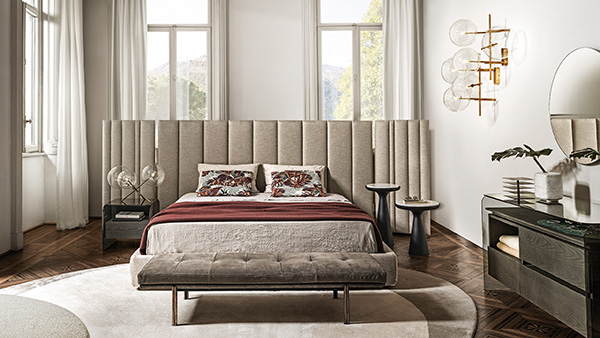 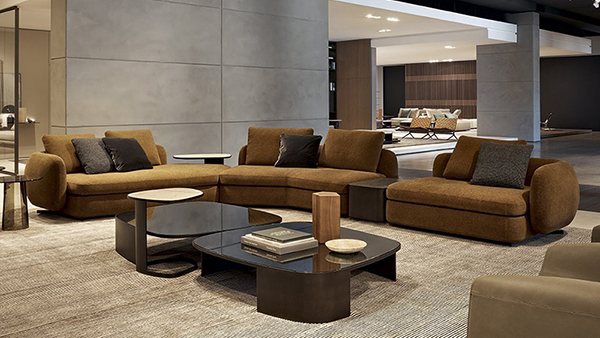